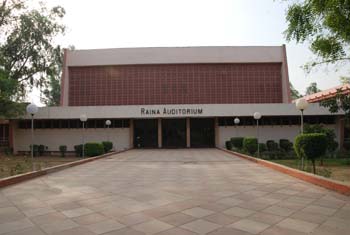 The pride of our school the 'Raina Auditorium' is an architectural delight which is spread over an expanse of 35000sqm and is one of the biggest auditoriums in Delhi. It can accommodate upto a thousand people and is divided into the balcony and the ground floor. Raina Auditorium was founded by late General Raina in the year 1974 and since then it has been the pride of our school. The entrance is an of the amalgam of the traditional and the modern as the blend is exhibited by teak wood panels contrasted with Italian tiles. As one enters ,the sheer magnitude of the place takes your breath away and one can actually visualize Tapsites involved in various events all through the year in that very place. It is a host to our TAPS Fest, Annual Day, Academic Excellence, Investiture,Valedictory ceremonies and numerous other Intra-school events. The stage has left and right wings leading to the green rooms. The fervour and excitement of being on the stage and backstage can be felt by anyone who has witnessed an APS, DK event.

The state of the art auditorium has its own PA system, multiple speakers, mikes, screen that is used for various school events, workshops and conferences. The rear of the auditorium extends towards an assembly stage which is also equipped with a PA system.