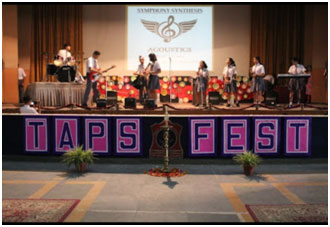 The word Initium Novum is a Latin term, meaning ‘A new beginning’. TAPS FEST 2019 was a major success with over 31 events and 2500+ participants from 59 reputed schools, from all over Delhi and NCR. It was a great learning experience for the Students of APS DK as they interacted, discussed and shared their common vision with the students from all over Delhi, and got a varied exposure. The visiting schools were all praises for the collective efforts of the students of APS DK and the teachers who guided the efforts of students in making the event a stupendous success. They marvelled at the level of the events, both numerically and qualitatively. The three months of constant hard work, nagging and missing of classes by the Organising Team of the 5 Activity Coordinators – Chaitanya Kandpal, Mihika Mukherjee, Manya Deshpande, Anika Sood, Minakshi Kumari and the Head Girl 2019 – Vyomika Dev; the constant support of Executive team, especially Devashish Vashisht, Tamanna Swain, Ujjwal Singh and Agrima Dwivedi, under the constant guidance of the Activity In charge, Ms. Harpreet Kaur did finally pay off. It was indeed a great success and a benchmark has now been set for all the future generations of the DK family to do even better 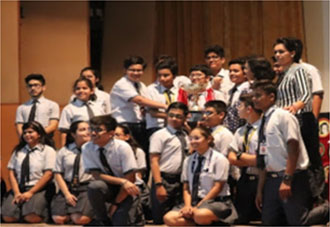 31 Competitions ,in which 29 were On site and 2 online for classes 3-12 saw participation of 59 elite and progressive schools of Delhi-NCR with a whopping 3000 participants.The event was co -sponsored by Yes Bank, Vijaya bank ,ISDI Mumbai , Colligify and Pahal school of design.The Chief guest for the inauguration was Brig Suneet Malik.The prize distribution for the various competitions was done at the venues by eminent judges of the respective events.

It is imperative to mention that the fest was a resounding success with some great feedback on organisation of the mega fest .

TAPSFEST - the Annual Extravaganza
Since it's inception in the year 1992, this signature event of the school is growing by leaps and bounds . Thematic amalgamation of 25-30 events spread over two days , witnessing participation of more than 50 schools give, autumn ( August), every year ,memoirs to reckon with. The event hosts elite and progressive schools of Delhi - NCR in nail biting Competitions across all classes . Events include- Performing Arts , Tech events, e- sports ,creative abilities, brainteasers , oratory skills along with multifaceted club specific competitions . A much awaited event in the inter - school city circle, The TAPSFEST Rolling trophy is awarded to school with participation in more than fifty percent of the events and maximum score in the overall tally. Gen X Rolling trophy for tech- events hosted by Genesis clu of the school is als awarded each year. The inauguration and prize distribution is done by notable chief guest who grace the occasion on both days to boost morale of the mentors and students allike.